Durham Miners Demand Banner Back from Stadium of Light 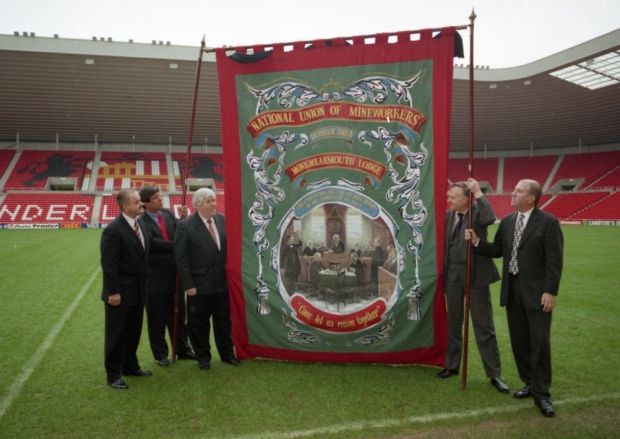 Dave Hopper the General Secretary of the Durham Miners' Association is writing to Sunderland Football Club to demand the return of the Wearmouth Miners' Banner, which is on permanent display in the Stadium of Light, in protest at the decision to appoint the self-confessed fascist, Paolo Di Canio, as their head coach.

Mr Hopper, who worked for 27 years as a miner at Wearmouth Colliery, the site on which the Stadium of Light now stands, described Di Canio's appointment as an outrage and a betrayal of all those who fought and died fighting fascism.

He said,"I like many thousands of miners have supported Sunderland from infancy and are passionate about football. But, there are principles which are much more important.

"Our banner represents the Durham miners' long struggle for the rights of the working class, rights which were annihilated by fascism in Germany, Italy, Spain and Chile.

"We have a sacred obligation to the millions who were wiped out by Hitler, Mussolini and Franco to oppose fascism wherever and in whatever context this evil creed raises its head particularly at a time when working people are again being forced to pay for capitalism's crisis as they were in Europe in the 1920s and 30s.

"The appointment of Di Canio is a disgrace and a betrayal of all who fought and died in the fight against fascism.

"Everyone must speak out an oppose this outrage and call on Ellis Short and the Sunderland Board to reverse their decision.