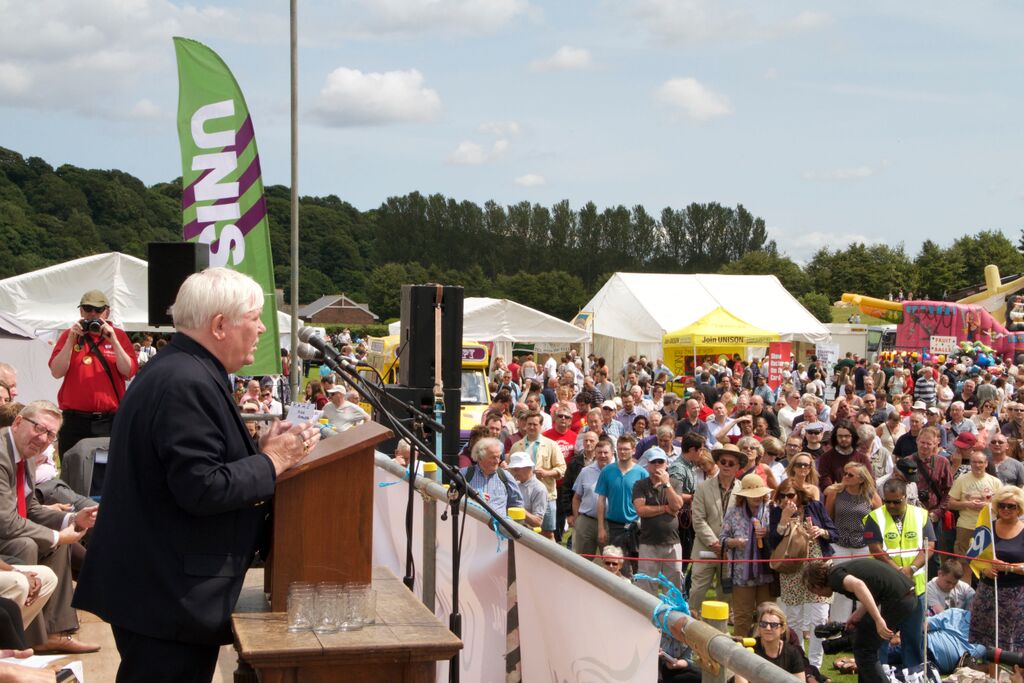 It is my privilege, once again, to welcome all miners, their families and supporters from the wider trade union and labour movement to the 131st Durham Miners’ Gala.

Despite all the attempts by the Tory press and media to write us out of history, we are still here in massive numbers to celebrate our community spirit and carry our socialist message on behalf of the working class.

We have endured five years of austerity during which the richest people in Britain have doubled their wealth while the poorest have been driven to the brink of destitution. And yet, despite the widespread anger against the Tory Liberal coalition the Labour Party was unable to put forward a credible alternative. As a result the party suffered an election disaster.

We now have to suffer lectures from the likes of Mandelson and other discredited Blairites, including the warmonger himself, who put forward the ridiculous notion that Labour lost because its programme was ‘too left wing’. We must, they say, return to the middle ground and appeal to ‘the aspiring middle classes’.

Labour’s failure has now saddled us with a Tory Government hell bent on cutting £12 billion from the welfare budget and they are itching to get started. We can see in their arrogant posturing that they think they have been given a mandate for this butchery. But, the reality is that only 11 million people voted Tory, whereas 34 million did not vote Tory and, most significant of all, 15million were so disillusioned with the self-serving professional politicians that they didn’t vote for anyone.

So, if these millionaire Tories think that 25 per cent of the electorate gives them a mandate to wage war on the most disadvantaged, the unemployed, and the sick and disabled then they are deluded.

Already thousands of families, in one of the richest countries in the world, are dependent on food and clothing banks. Further cuts will drive whole communities to the brink of desperation and they will fight back.

The Tories, however, are well aware that their policies will create social unrest and that is why they intend to further shackle the trade union movement by introducing legislation governing trade union strike ballots.

Their hypocrisy is truly breath-taking.  How can a government elected by a tiny percentage of the electorate demand that a trade union ballot can only be valid if a certain percentage of people vote?

It is even more hypocritical when we consider that in Parliament there are no secret ballots and no requirement for a certain percentage of MPs to vote. And just to make sure that MPs don’t step out of line, they employ an organised system of intimidation and blackmail operated by the ‘enforcers’ they call party whips.

Labour, the Tories and Liberal Democrats have created a situation where the gap between rich and poor has widened to a degree that is immoral and can’t be justified in any civilised society.

Capitalism has failed the people.

The banking system was brought to its knees by the relentless drive to extort profit from the efforts of working people and now the bankers continue their parasitic activity while the poorest are made to pay.

Politicians of all parties are all talking about aspirations as if aspirations are exclusive to the middle class. The subtext, of course, is the daft idea that the lower classes have no aspirations and are content to live off benefits. But we all have aspirations. Aspirations to live in an equal society where there is adequate social housing, schools and healthcare for everyone and where the sick and disabled are looked after and those who are unemployed are treated with dignity.

Capitalism has proved incapable of providing such a society, so surely we must start with the aspiration to create a socialist society and demonstrate to the 15 million who did not vote in this election that there is an alternative to the career politicians.

It is not going to be easy but they have drawn the battle lines.  We have to resist these attacks on the weakest in our society and give our youth an opportunity in life.  So let’s start the fight back at today’s Gala.

Have an inspirational day at the Big Meeting and a safe journey home.