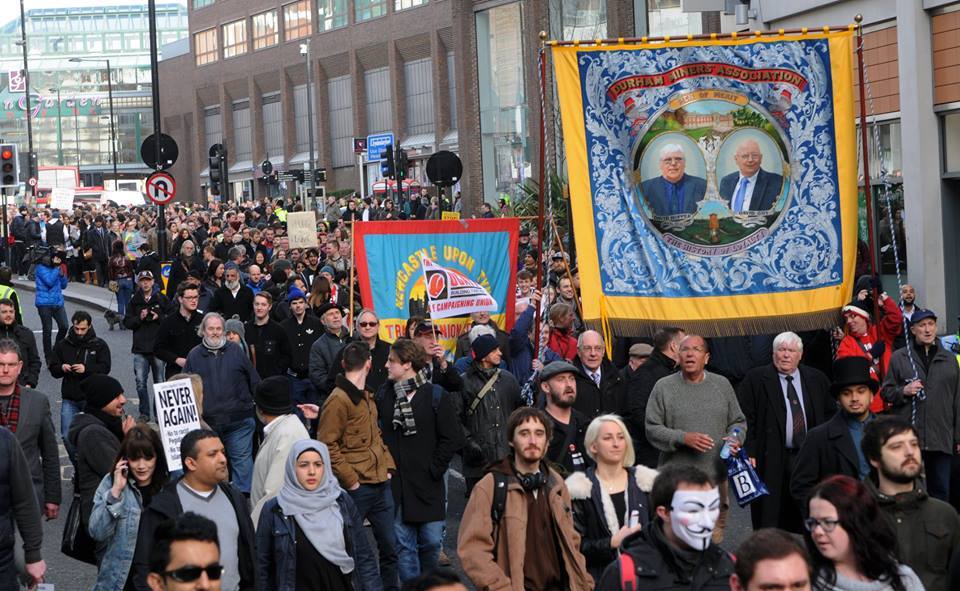 On February 28, the DMA Executive Committee joined over 3,000 anti-racist marchers in Newcastle to protest against a 200-strong PEGIDA demonstration – the first to be organised in Britain.

PEGIDA is a German right-wing organisation that claims to campaign against the so-called ‘‘Islamisationof Europe’’. Like the English Defence League, PEGIDA is a front organisation for far right extremists who play on people’s concerns about religious extremism and terrorism in order to encourage race hatred. The claim of Lutz Bachmann, the leader of PEGIDA, that his organisationis not racistwas somewhat undermined when it was revealed that he had posted notices of a racist nature on Facebook and a picture of himself made up to looklike Hitler, withthe caption, ‘He is back’.

Dave Hopper,DMA Secretary,who spoke atthe rally said,‘This is one of the most uplifting demonstrations I have attended. It is vital that we oppose any attempt to divide our people on the grounds of race and ethnicity.’

‘The economic and social problems we are facing arise, not from immigration as the likes of UKIP would have us believe, but fromthe corrupt capitalist system we live under and that is what all our efforts should be focused on.

‘Durham Miners have a proud record of opposing any form of racial hatred and we should never forget allthose who gave their lives to defeat fascism. Fascism must never be allowed to prosper ever again.’